The development of place-based symposiums emerged from a pilot interdisciplinary “workship” to introduce scholars and graduate students in the MES/MESc and MA in History programs at Nipissing University to think about what it means to conduct research on traditional and treaty territories, and to introduce students to the environmental histories of the Lake Nipissing region. The workship was hosted on the Chief Commanda II, which navigated across Lake Nipissing as part of the event.

A second symposium entitled, “Place-Based Reparative Environmental Histories (Symposium 2.0),” was organized as a critical intervention for the American Association of Environmental Historians conference in Ottawa in March 2020 (cancelled due to COVID19) to address the lack of Indigenous representation, and place-based awareness, at academic-history conferences, especially those that address contemporary and historical issues that Indigenous communities confront daily. The event connected Indigenous scholars, researchers, community activists, artists, and allies so that they can critically respond to this absence and foster dialogue and respect for different ways of knowing the past. Symposium 2.0 was in partnership with a number of the First Nation communities that share the traditional territory of Kiji Sibi (Ottawa River watershed) – Kitigan Zibi Anishinabeg First Nation, Algonquins of Pikwàkanagàn First Nation, Nipissing First Nation, Dokis First Nation – and various interdisciplinary scholars and museum practitioners to respond to the Truth and Reconciliation Commission’s (TRC) recommendations, and to focus on the environmental histories of Turtle Island (North America), which speak directly to colonization’s long-lasting impacts and legacies.

The official ASEH 2020 Program, which include the circle sessions organized as part of Symposium 2.0 Program_2020reduced

The official Place-Based Symposium 2.0 Program, which included details on the circle sessions, the hotel art installation, and a special day at the Library and Archives Canada: 1920 ASEH Symposium Booklet 14Apr20 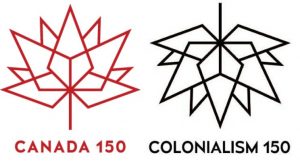 In October 10, 2017, Nipissing University hosted a five day international symposium to consider the question of how we can bring together the humanities and geophysical sciences to revisit how we examine environments in the past within the context of settler colonialism.

Highlights of the symposium included Keynote addresses by:

Some of the highlights of our event are featured here: Collage of photos from symposium 20 Nov 2017-7