Over the years I have volunteered with the North Bay and District Multicultural Centre. This great organization provides settlement services and more to immigrant newcomers in the district. In 2014, the centre produced a video to promote the City of North Bay and I had an opportunity to promote Nipissing University. 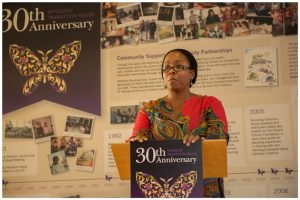 Speaking at the NTH 30th Anniversary celebration in 2013.

Another organization that I am proud to volunteer with is the Nipissing Transition House (NTH), the local women’s shelter. The mission of NTH is “to provide essential services to women, and the children in their care, who are fleeing abuse. To help create a safe community.”  In partnership with the City of North Bay and the North Bay Police Service, NTH launched the One Pledge initiative to end domestic violence in our community. The pledge asks community members to:

For more information on the initiative and to sign the pledge visit onepledge.ca.

In October 2007 , Betty Farris, a retired high school music teacher, started an instrumental class for adults who had never had a chance to learn to play a concert band instrument. By Christmas Sunday, the J.O.Y. Band (Just Older Youth) had 25 members composed of new and a few experienced players and played in church. In 2009, Neil Kennedy, also a retired music teacher, joined the band as co- director. The J.O.Y. Band now has 68 members ages 18-91! They enjoy playing for various community events including public concerts, schools, seniors’ homes and civic events. All proceeds are donated to local charities. I joined the J.O.Y. Band in 2015 and after struggling on the clarinet for 2 weeks, I switched to the trombone. With each year, as my playing and confidence improves, we take on more challenging and interesting pieces.