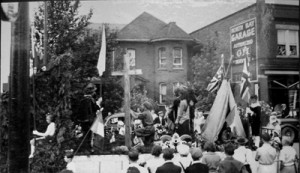 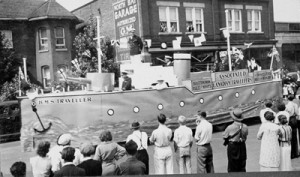 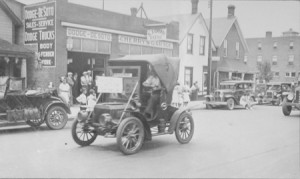 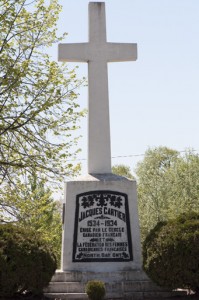 In 1925 the grand opening parade of OHW on Monday August 3rd was billed as a pageant parade. At the time, pageants were all the rage. Quebec City had put on a huge pageant to celebrate its 300th anniversary in 1908. In Ontario, many of the Old Home Week celebrations of the 1920s included a pageant but these required a large outdoor space to stage them and hundreds of volunteers to act in them and North Bay settled for a less ambitious pageant parade instead. Still, like pageants, this would allow the town to highlight its history as well as its recent progress for the visitors. The key pageant floats were designed by an “expert” and the costumes were also specially prepared for them. 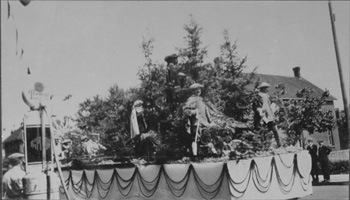 The organizers worked from the point of view that North Bay’s history began with Champlain’s travel through the area in 1615. A float portraying Champlain was therefore one of the key pageant floats. It created a stirring image of “Samuel de Champlain and his dauntless followers, bearing hard on their paddles, with their faces eagerly set forth in the direction of the new lands they were to explore…” This float was sponsored by the Knights of Columbus. Champlain, played by Chas. St. Germain, was portrayed as “the first of the party and was shown as gazing from the top of a hill over the surrounding country while his companions were landing the rest of the flotilla….”

Other pageants floats represented Jean Nicolet, the first white man to set foot in North Bay, Father Claude Pijart, the first priest to the Nipissing Indians, a band of coureurs de bois and fur traders, and the Rev. Father Le Caron and a band of frenchmen. The three railways present in North Bay, put considerable effort into their floats as well. 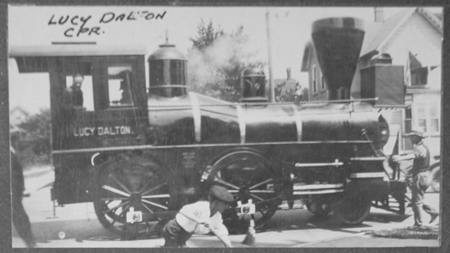 “The C.P.R. was represented by the Lucy Dalton, the first railway engine in Northern Ontario, drawing a miniature caboose with the conductor and the brakie in uniform on the steps. The engine was driven by a gasoline motor but nothing was lost to the realistic appearance as the engineer and firemen were in the cab, smoke issued forth and a whistle tooted incessantly.” “…Lottie Britton and Alex Gillie, employees of the Canadian Pacific Railway in the early days, piloted Lucy Dalton, the replica of the first engine used in the service along the streets. Wm. Dreany and Harry Hughes looked out from the tail end of the caboose as they did when North Bay was only a water tank and a few surrounding shacks.” [The Nugget, Aug 4 1925.] 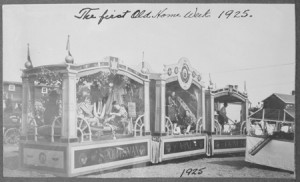 The T. & N.O., in three sections, depicted Northern Ontario with the themes of farming, mining, and sport life. Designed by Russel Huntington, it was built in the railway shops in only two weeks. “The third section of the float pictured a sportmen’s camp with great realism. The Indian guide was not other than Frank Commando, chief of the Nipissing tribe, while the fish were brought fresh from the water of Lake Temagami.” [The Nugget, Aug. 7, 1925]

The parade included clowns, bands, soldiers, policemen and many floats by North Bay businesses. Few of them were described but pictures of the parade show some of them. Below:  A.B. Gordon & Co. Ltd., a major lumber company in the area, the float from Beamish Stores and a float showing a model of the original post office. 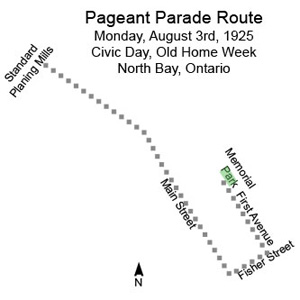 The pageant parade formed at the west end of Main Street. Getting it going took some time as the parade streched for six city blocks and the marshals had to place each one. It marched down Main to Fisher before turning North and making its way to Memorial Park where a large crowd was waiting and the city of North Bay was granted its charter.

Hartley Trussler was working that day but he had his camera with him and took time to take pictures of several floats as they went by the North Bay Garage. For more photos from Trussler’s album see below.