In 1935, the city of North Bay decided that it could not afford to spend money on an OHW celebration. Initial plans had already been made to hold a second OHW the first week of August. The promoters turned to local groups and organizations to see if any of them might be able to sponsor a day. In the end, enough groups came forward that OHW went ahead. The organizers were aware from the beginning that the Dionne quintuplets would be generating tourism to the area and they hoped to capitalize on this. 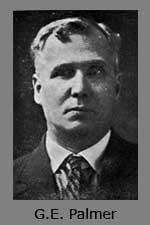 The central committee of OHW in 1935 was chaired by Dan Barker and the secretary was Alderman G.E. Palmer. The remainder of the committee was made up of two or three representatives from each of the community groups sponsoring a day. The Central Committee coordinated their efforts and dealth with the city on general matters relating to the event while the individual groups focussed on their parades and program.

The organizing groups were: the 159th Battalion, the North Bay Motor Club, the Cercle Canadien Français and the North Bay branch of the Fédération des Femmes Canadiennes-Françaises (FFCF), the Knights of Columbus, the Rorab Shrine Club, and the Associated Canadian Travellers.

It is worth noting that although French Canadian Day was organized by both a men’s and a women’s group, only the men’s group (Cercle Canadien-Français) had representatives on the Central Committee. The women’s group (Fédération des Femmes Canadiennes-Françaises) was responsible primarily for the banquet on the evening of French Canadian Day, although they were also involved in fundraising for the Jacques Cartier Monument. The French souvenir book, however, lists the full executive of both groups.

Articles in the Nugget on the organization of OHW in 1935 are listed and summarized in the attached pdf file.