In 1925, the big entertainment special event was an act by James Hardy, a high wire walker and stunt man, advertised as “The only living ‘Hero of Niagara Falls'”, the ‘Marvel of Genesse Gorge’ and the ‘Wonder of Montmorency Falls’. ‘The World’s Famous Aerial Artist’ performed daily at Wallace Park with a special show for Children’s Day. During his act he changed clothes and balanced on a bicycle.

A huge concert with about 700 school children was another special event held during OHW. It was under the direction of J. Gatenby and held at the arena.

The CNR presented outdoor movies for the entire week. These were screened on the side of their local office with the city turning off three lamp posts to accomodate this. The movies included long screening of Canadian scenic productions, comedies and cartoons. The scenic productions shown were: the Triangle Tour, Diary of a Rocky Mountain Badger, NipigonTrails, Great Lakes Romance, Where Its Always Vacation time, In Old Quebec, and Where the Moose Run Lodge. (The Nugget , August 4, 1925.)

One event which surprisingly, was not part of the official program, was the unveiling of a cairn in honour of Samuel de Champlain by the Imperial Daughters of the Empire. The cairn was located at the Toronto highway where it was crossed by the La Vase River. Judge Valin would unveil the cairn. Speeches were made by Rev. Father Chapleau and Mayor McDonald. Mrs. W. Cockburn, chapter regeant, oversaw the affair which was attended by eighty people.(The Nugget , August 4, 7, 1925.) 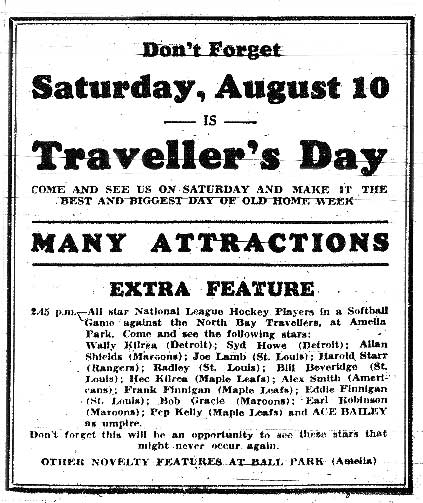 Hockey was by far the most popular sport in North Bay and some local players had gone on to the National Hockey League. In an era of natural ice, a summer event like OHW did not allow for a hockey match. But even without a hockey game, these players would be a draw. They were brought in to play softball against a local team. The match which pitted fourteen NHL professional hockey players against the North Bay Travellers and gave spectators a chance to meet and greet these hockey players drew a crowd of 4,000 to Amelia Park on Saturday afternoon. The results of the game, a defeat of the Travellers by a score of 11-10 was probably not as important as the chance to see the hockey stars in person. Traveller’s Day with this special feature was advertised well in advance. The ad to the left and the program listed the hockey stars who were coming: Pep Kelly, Maple Leafs; Bob Gracie, Maroons; Hec Kilrea, Maple Leafs; Wally Kilrea, Detroit; Syd Howe, Detroit; Allan Shields, Maroons; Joe Lamb, St. Louis; Bill Beveridge, St. Louis; Alex Smith, Americans; Frank Finnegan, Maple Leafs; Eddie Finnegan, St. Louis; Earl Robinson, Maroons; and, Ace Bailey, “former star of the Toronto Maple Leafs and one of the most popular stars of all time” as umpire. 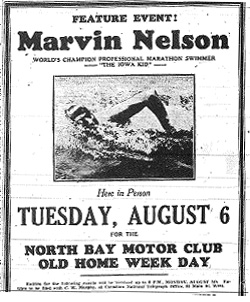 Marathon swimmer Marvin Nelson was a star attraction at the 1935 OHW in North Bay. According to the advance publicity for the event, Nelson was world champion swimmer five times over. His first win of the unofficial world champion title was in 1930 in Toronto at the Canadian National Exhibition. Three years later, he won again, the first person to do so twice, to a crowd of more than 100,000. In North Bay the crowd was much smaller, but Nelson not only performed, he also considered coming back again. 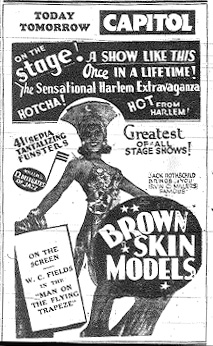 The Capitol Theatre also took advantage of the crowds at OHW to bring in special shows like this one, a “Harlem Extravaganza” called “Brown Skin Models.”